Manga crush is a weekly meme hosted here,at Daydreaming Bookworm where you rant about the manga character on whom you have recently developed a crush.For more info on the meme,click here .


For my first manga crush,the character I'll be ranting about is Tora Igarashi from Kaichou wa Maid-sama!.Now those who are already familiar with this manga and have viewed my previous My Book Boyfriend  post,I know what you're thinking.Why am I using this same character again?It is because I'm totally head over heels in love with him.Oh and by the way,I only used his appearance in the other meme,which totally doesn't count. :p
So,on to the meme.Here's some info on the manga.

Title: Kaichou wa Maid-sama!
Year of release: 2005
Status: Ongoing
Author: Fujiwara Hiro
Artist:  Fujiwara Hiro
Genre: Comedy, Drama,Romance,Shoujo
Blurb: Seika High School, once an all-boys school notorious for its wild students and for generally being a terrifying place for girls, has recently become a co-ed school. With the female population still a minority and living in fear of the over-the-top antics of the males, Misaki Ayuzawa takes it into her own hands to reform the school and allow the girls to feel safe in the rough environment. Training, studying, and even becoming the first female student council president of the school, Misaki has gained a reputation among the male students body as an uptight, boy-hating dictator and as a shining hope for the teachers and fellow female students. However, despite her tough-as-nails appearance, she secretly works part-time at a maid café in order to support her family. Unfortunately, her hard-earned reputation is threatened when the popular, attractive, and somewhat impassive Takumi Usui takes an interest in her after discovering her in a maid uniform after school. Tora Igarashi is the student council president of Miyabigaoka High School.He has a very complicated personality. He initially appears as a gentleman who marvels at Misaki and the changes she has brought to Seika High, offering her a chance to come to Miyabigaoka with an exceptional loan. He is quickly revealed to be a lecherous young man who has become bored with the women surrounding him, who are easily submissive because of his wealth. He enjoys causing drama around him and he thinks that money can buy anything. He convinces people usually with a fake smile. Tora's only real smile is his evil one. He says he never has the time to drool over girls. But he only has place in his heart for Misaki. However, there is another scary, womanizing side to him , which was revealed to Misaki when she went to refuse the offer to join Miyabigoaka. Although she develops a hatred for him with this, but he just becomes more interested than ever in her. He felt (being the heir of the immensely wealthy family) that, Misaki was different from the other girls, whom he could get with money.

So obviously you can see why I like him.He is a bad boy,the type your parents would freak out if they find you dating.Though it still helps that he's charming and rich as well. ;)

He also appears to have unusual fangs,which makes him all the more hot. =D
Now here are some pictures of him which had me drooling: 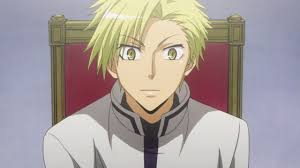 So who's your manga crush this week?Hurry up and let me know! ;)