Hi guys!Want to win a first edition copy of The Assassin's Curse by Cassandra Rose Clarke?!Then just enter using the rafflecopter widget below.


Giveaway rules:
-Is International
-Ends on the 20th of September
-Winner will be notified via email.If he/she does not respond within 24 hours,another winner will be chosen.
-The book will take a couple of weeks to reach you as they're just on print.(Yes people,you're gonna get the very first copies fresh out of the printer :D) 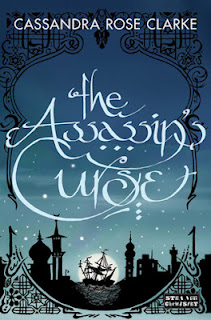 The Assassin's Curse
by Cassandra Rose Clarke
Expected publication:  October 2nd 2012 by Strange Chemistry
Blurb:  Ananna of the Tanarau abandons ship when her parents try to marry her off to an allying pirate clan: she wants to captain her own boat, not serve as second-in-command to her handsome yet clueless fiance. But her escape has dire consequences when she learns the scorned clan has sent an assassin after her.

And when the assassin, Naji, finally catches up with her, things get even worse. Ananna inadvertently triggers a nasty curse — with a life-altering result. Now Ananna and Naji are forced to become uneasy allies as they work together to break the curse and return their lives back to normal. Or at least as normal as the lives of a pirate and an assassin can be.

Cassandra Clarke is a speculative fiction writer and occasional teacher living amongst the beige stucco of Houston, Texas. She graduated in 2006 from The University of St. Thomas with a bachelor’s degree in English, and in 2008 she completed her master’s degree in creative writing from The University of Texas at Austin. Both of these degrees have served her surprisingly well.

During the summer of 2010, she attended the Clarion West Writers Workshop in Seattle, where she enjoyed sixty-degree summer days. Having been born and raised in Texas, this was something of a big deal. She was also a recipient of the 2010 Susan C. Petrey Clarion Scholarship Fund.

You can also check out my review of the book and Cassandra's worldbuilding guest post on "An Insight of the Characters' World".Thanks sooo much to Cassandra's awesome editor Amanda Rutter for letting me arrange this giveaway!

First winner of the giveaway is cancelled for not responding.