Flag design for ARC contest of Scarlet by Marissa Meyer

So Marissa Meyer's having a contest on her blog where we have to design flags for each of the countries present in the world of her Lunar Chronicles series.For more info. on this contest and to know how you can participate,check out this link: http://www.marissameyer.com/blogtype/design-a-flag-contest-enter-to-win-an-annotated-scarlet-arc/.

So after a lot of contemplating,I've finally come up with my flag design for the contest.It's for The Eastern Commonwealth,that is,where Cinder lives.Here it is! 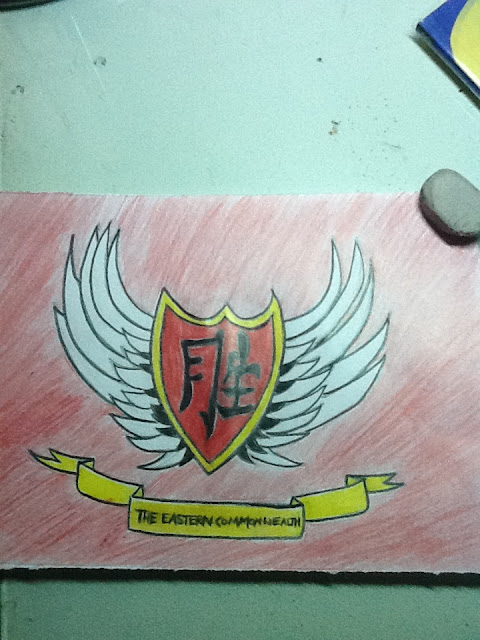 Well,considering the fact that it's been more than a year since I last picked up colour pencils I think I did a pretty great job! :) The Chinese symbol in the middle represents victory,at least according to google images.The wings on the shield represents freedom,and altogether they symbolize a free country or republic.Since New Beijing is the capital of The Eastern Commonwealth,I figured that most of the country falls in the Chinese territory which is why I put a Chinese symbol along with the colour combination of the flag being red and yellow,so that it reflects the geographical culture.I really hope this wins me the ARC.Wish me luck guys! :) (P.S ignore the eraser on the top right corner.I just needed something to hold the paper down.)

Have no idea what I'm talking about?Then check out Marissa Meyer's books here so that you can join in the fun!Happy Wednesday! :)
Posted by Unknown at 4:36 PM