Showcase Sunday is a weekly meme hosted by Books,Biscuits and Tea and its aim is to showcase our newest books or book related swag and to see what everyone else received for review, borrowed from libraries, bought in bookshops and downloaded onto eReaders this week.


You see,I do have quite a few review copies that I haven't even bothered to touch yet and therefore I kept feeling really guilty about that.So then I came across this event called Review Copy Cleanup which is hosted jointly by Nyx Book Reviews and Books, Biscuits and Tea and immediately signed up.This also gave me the courage to take up this week's new review copies.You can check out the right sidebar of my blog or simply take a trip to the blogs who are hosting this event for details.Well,enough about that.Here's my haul for this week:(P.S all are review copies)

The Hangman in the Mirror
by Kate Cayley
Blurb:
"A strong-willed 16-year-old girl fights for survival in 18th-century North America. "
Francoise Laurent has never had an easy life. The only surviving child of a destitute washerwoman and wayward soldier, she must rely only on herself to get by. When her parents die suddenly from the smallpox ravishing New France, Francoise sees it as a chance to escape the life she thought she was trapped in.
Seizing her newfound opportunity, Francoise takes a job as an aide to the wife of a wealthy fur trader. The poverty-ridden world she knew transforms into a strange new world full of privilege and fine things -- and of never having to beg for food. But Francoise's relationships with the other servants in Madame Pommereau's house are tenuous, and Madame Pommereau isn't an easy woman to work for. When Francoise is caught stealing a pair of her mistress's beautiful gloves, she faces a future even worse than she could have imagined: thrown in jail, she is sentenced to death by hanging. Once again, Francoise is left to her own devices to survive . . . Is she cunning enough to convince the prisoner in the cell beside her to become the hangman and marry her, which, by law, is the only thing that could save her life?
Based on an actual story and filled with illuminating historical detail, "The Hangman in the Mirror" transports readers to the harsh landscape of a new land that is filled with even harsher class divisions and injustices.

Ashen Winter
by Mike Mullin
Blurb:  It’s been over six months since the eruption of the Yellowstone supervolcano. Alex and Darla have been staying with Alex’s relatives, trying to cope with the new reality of the primitive world so vividly portrayed in Ashfall, the first book in this series. It’s also been six months of waiting for Alex’s parents to return from Iowa. Alex and Darla decide they can wait no longer and must retrace their journey into Iowa to find and bring back Alex’s parents to the tenuous safety of Illinois. But the landscape they cross is even more perilous than before, with life-and-death battles for food and power between the remaining communities. When the unthinkable happens, Alex must find new reserves of strength and determination to survive.

My Super Sweet Sixteenth Century
by Rachel Harris
Blurb:  On the precipice of her sixteenth birthday, the last thing lone wolf Cat Crawford wants is an extravagant gala thrown by her bubbly stepmother and well-meaning father. So even though Cat knows the family’s trip to Florence, Italy, is a peace offering, she embraces the magical city and all it offers. But when her curiosity leads her to an unusual gypsy tent, she exits . . . right into Renaissance Firenze.

Thrust into the sixteenth century armed with only a backpack full of contraband future items, Cat joins up with her ancestors, the sweet Alessandra and protective Cipriano, and soon falls for the gorgeous aspiring artist Lorenzo. But when the much-older Niccolo starts sniffing around, Cat realizes that an unwanted birthday party is nothing compared to an unwanted suitor full of creeptastic amore.

Can she find her way back to modern times before her Italian adventure turns into an Italian forever?

Saving June
by Hannah Harrington
Burb:    ‘If she’d waited less than two weeks, she’d be June who died in June. But I guess my sister didn’t consider that.’

Harper Scott’s older sister has always been the perfect one so when June takes her own life a week before her high school graduation, sixteen-year-old Harper is devastated. Everyone’s sorry, but no one can explain why.

When her divorcing parents decide to split her sister’s ashes into his-and-her urns, Harper takes matters into her own hands. She’ll steal the ashes and drive cross-country with her best friend, Laney, to the one place June always dreamed of going, California.

Enter Jake Tolan. He’s a boy with a bad attitude, a classic-rock obsession and nothing in common with Harper’s sister. But Jake had a connection with June, and when he insists on joining them, Harper’s just desperate enough to let him. With his alternately charming and infuriating demeanour and his belief that music can see you through anything, he might be exactly what she needs.

Except June wasn’t the only one hiding something. Jake’s keeping a secret that has the power to turn Harper’s life upside down again. 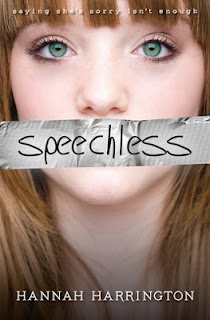 Until now. Because the last secret she shared turned her into a social outcast--and nearly got someone killed.

Now Chelsea's has taken a vow of silence--to learn to keep her mouth shut, and to stop hurting everyone else. And if she thinks keeping secrets if hard, not speaking up when she's ignored, ridiculed and even attacked is worse.

But there's strength in silence, and in new friends who are, shockingly, coming her way. People she never noticed before. A boy she might even fall for. If only her new friends can forgive what she's done. If only she can forgive herself.

The Punk Ethic
by Timothy Decker
Blurb:   Back to music, what are songs anyway? They’re crappy little stories. And there are two kinds: the whiny confession. Which suck. And the fictional story. Which suck. All this strumming and singing is a waste. I’m tired of wasting time. I don’t want to tell anybody anything about me. That’s stupid. I don’t want to invent some story. I don’t want to be entertaining. That’s stupid. I have to do something. Wake up, Martin. Go start something. Go! If you want to rock, you come out swinging. Well, Martin Henry just made a fist. Challenged by a teacher to actually “do” something, Martin walks a minefield of idiot friends, an unfathomable Dream Girl, high school, and relative pennilessness to prove that he can change the world. The funny thing about change, it screws up everything. Whatever…


So what's your haul this week?Just leave the link in comments so that I can check it out. ;)
Happy Sunday! :)