Manga Crush! is a weekly meme hosted here,at Daydreaming Bookworm where you rant about the manga character on whom you have recently developed a crush.For more info on the meme,click here .

For today's Manga Crush! ,I'll be ranting about Train Heartnet from Black Cat.As usual,before ranting,here are some info on the manga:

Title: Black Cat
Year of release: 2000 - 2004
Status: Completed
Author:  Yabuki Kentaro
Artist:  Yabuki Kentaro
Genre: Action,Comedy,Drama,Sci-Fi,Shounen
Blurb:  Train Heartnet, also known as Black Cat,was an infamous assassin for a secret organization called Chronos...until he abandoned that cold-blooded existence to live on his own terms as an easygoing bounty hunter. But is Train's past as far behind him as he thinks? 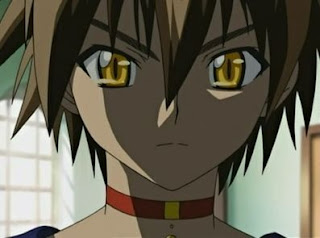 Train Heartnet is the main character in the anime and manga seires of Black Cat, as well as a sweeper partnered with Sven Vollfied.

Train's underground name is "Black Cat" because of the misfortune that lies in his wake. He always says to his target "I have come to deliver some bad luck" before killing them and he always completes a mission with 100% accuracy, without remorse. This is a side that Creed, a comrade of lower ranking, admires. Train´s demeanor is very cool, bordering nonchalant and almost detached until he met a girl, Saya, who was a bounty hunter who lived life as she wanted to. He then began to reveal a much warmer and more human side of himself, which Creed despised Saya for.
After giving up his life as an eraser working for Chronos, Train becomes a Sweeper (bounty hunter) and his personality changes drastically as he takes on a more lighthearted approach to life. There have been many scenes where Train is displayed carefree and even somewhat foolish. He often gets into fights with Sven (these fights involve Train letting another bounty slip through, his bottomless appitite, being way to silly, etc.) Following Saya´s way of life, he refuses to kill, and seems to take enjoyment in annoying his enemies. He isn't one to "look before he leaps" and his antics usually lead to accumulating debt that he and his partner Sven have collected from property damage. At times he is solemn, usually from regret that he was unable to help someone and other times, carefree and exuberant. There are times when Train will revert to his earlier personality when tempted.

I've always liked Train,especially his brooding face.I know,weird but I find it really cute! XD Though it doesn't hurt when he smiles either. :) Creed's good-looking too but he has this charm to him which really repels me.And plus,Train's a bit more serious type of guy at the beginning.I don't know why but I like that side of him better.Gosh!Now I sound like Creed!And the black trench coat suits him better as well.Here are some pictures of him from my very own arsenal.Take a closer look at the ones in which he's wearing the black trenchcoat.You'll see what I mean. 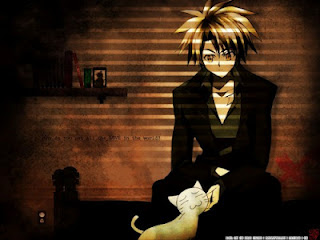 Awesome right! ^^ What's your Manga Crush this week?Just leave the link to your post in the Mister Linky's Magical Widget below.Thanks for reading! :)