An Insight of The Characters' World: Guest Post and Swag Giveaway by Tina Connolly


I would like to thank Tina Connolly,author of  Ironskin,for doing such a wonderful guest post at my blog.Here's her insight of the characters' world in Ironskin.

I love worldbuilding. I love it when authors come up with crazy
intricate new worlds and drop me into them. One of the reasons Diana
Wynne Jones is one of my all-time favorite authors is for the way she
puts you into some completely unique world (as in Archer's Goon, say)
and then slowly reveals the world and its twists.
Another thing I love about worldbuilding is that you can craft it
along with your character to make the two work together. The world's
problems and your character's solutions can go hand in hand. And vice
versa. In Ironskin, my main character, Jane, has been scarred by a fey
curse on her cheek. It's sort of like a poison that infects those
around her with rage - unless she keeps her iron mask on.  So when I
was figuring out exactly what Jane's story was and how she would fight
back against her curse, I was also figuring out the details of how
curses worked.
Jane's story takes place about 5 years after a human-fey war.
Although my book is not alternate history, I ended up reading a lot of
books about England post-WW1, because I wanted to give the book a firm
grounding of place. I felt that was a good jumping off point.  Then,
since the fey live deep in forests, the country was more affected than
the city during the war. The war was right on their doorstep, and five
years is not enough time to forget. So I tried to work this into the
background of how different characters thought about the fey, the war,
all those things. City-born Miss Davenport is willing to lounge around
near the forest, for example, while Jane is always on guard.
One thing my first readers always ding me on is that I haven't put
enough of the world itself actually on the finished page. I know it in
my head, but I'm usually busy concentrating on the characters' arcs in
the first draft. So second draft I layer in all the details of setting
and place that I know but did not write on the first go-round. And yet
somehow, there's never enough room in a book to cram in everything you
know. It's funny, because worldbuilding choices will make me sit there
and ponder for an hour over a single sentence (like, how would Dorie's
room be decorated? What random things would past governesses leave
behind in Jane's bureau?)...but there's never a point to stop and bore
the reader with the backstory of why I chose that one precise detail. 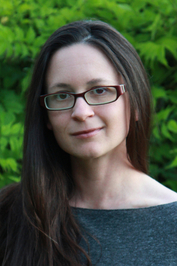 Tina Connolly lives in Portland, Oregon with her husband and young
son, in a house that came with a dragon in the basement and blackberry
vines in the attic.  Her stories have appeared in Strange Horizons,
Fantasy, Beneath Ceaseless Skies, and the anthology Unplugged: Year’s
Best Online SF 2008.  Her debut fantasy novel IRONSKIN is forthcoming
from Tor in October 2012, with a sequel in 2013.  She is a frequent
reader for Podcastle, and is narrating a 2012 flash podcasting venture
called Toasted Cake.  In the summer she works as a face painter, which
means a glitter-filled house is an occupational hazard.  Her website
is tinaconnolly.com.

Ironskin will be published in October 2nd 2012 by Tor Books.Feel free to add it to your TBR list on goodreads here.And here's a bit about the book so that you can get familiar with it:

It’s the only way to contain the fey curse that scars her cheek. The Great War is five years gone, but its scattered victims remain—the ironskin.

When a carefully worded listing appears for a governess to assist with a "delicate situation"—a child born during the Great War—Jane is certain the child is fey-cursed, and that she can help.

Teaching the unruly Dorie to suppress her curse is hard enough; she certainly didn’t expect to fall for the girl’s father, the enigmatic artist Edward Rochart. But her blossoming crush is stifled by her own scars, and by his parade of women. Ugly women, who enter his closed studio...and come out as beautiful as the fey.

Jane knows Rochart cannot love her, just as she knows that she must wear iron for the rest of her life. But what if neither of these things is true? Step by step Jane unlocks the secrets of her new life—and discovers just how far she will go to become whole again.

Tina is also giving away a signed cover-flat of Ironskin to one lucky winner.Here's how it looks like: 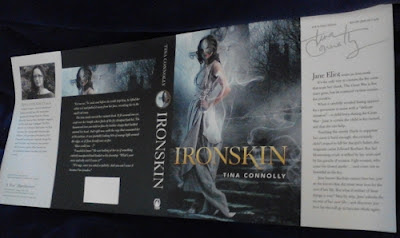 Gorgeous isn't it?So if you'd like to get your hands on it all you have to do is use the rafflecopter widget below.Giveaway is international and runs till September 7th.Winner will be notified via email and if he/she does not reply within 48 hours,another winner will be chosen.
a Rafflecopter giveaway
Posted by Unknown at 2:13 PM

Email ThisBlogThis!Share to TwitterShare to FacebookShare to Pinterest
Labels: An Insight Of The Characters' World, Giveaway, Guest Post