Today,Liz Coley,author of Pretty Girl 13,stops by at Daydreaming Bookworm along with a guest post and is giving away a U.K Edition copy of her book to one lucky INTERNATIONAL reader!Check them out below. 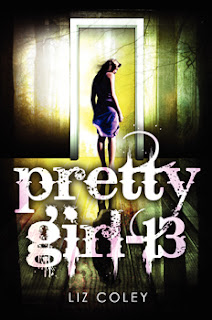 Angie Chapman was thirteen years old when she ventured into the woods alone on a Girl Scouts camping trip. Now she's returned home…only to find that it's three years later and she's sixteen-or at least that's what everyone tells her.

What happened to the past three years of her life?

But there are people who do — people who could tell Angie every detail of her forgotten time, if only they weren't locked inside her mind. With a tremendous amount of courage, Angie embarks on a journey to discover the fragments of her personality, otherwise known as her "alters." As she unearths more and more about her past, she discovers a terrifying secret and must decide: When you remember things you wish you could forget, do you destroy the parts of yourself that are responsible?

Liz Coley's alarming and fascinating psychological mystery is a disturbing - and ultimately empowering page-turner about accepting our whole selves, and the healing power of courage, hope, and love.

Liz Coley writes fiction for teens and for the teen in you.

Self-published YA novel Out of Xibalba features a contemporary teenager thrown back to ancient Mayan times.
The story starts when the world ends.

Pretty Girl-13 from HarperCollins will be released in at least ten languages on five continents, in print, ebook, and audiobook.
There are secrets you can't even tell yourself.

Liz lives in Cincinnati, Ohio with her husband, her teenaged daughter, a snoring dog, and a limping old cat. When she's not involved in writing-related activities, she can be found sewing, baking, shooting photos, playing tennis, and singing.

There’s a maxim for beginning writers: “Write what you know.” But it is equally valid to write about what you want to know. Lack of pre-existing knowledge doesn’t have to hold you back, not in these wonderful days of internet and free long-distance calling.

When I decided to write Pretty Girl-13 in 2009, I had two starting points for my subject matter research: understanding Dissociative Identity Disorder and learning about the new research field of optogenetics. Having a degree in science helped in both areas.

Of the many autobiographies on Multiple Personality/Dissociative Identity Disorder, I studied The Flock (Joan Frances Casey and Lynn Wilson), and When Rabbit Howls (The Troops for Truddi Chase), both of which featured terrible instances of child abuse. They were a rough read. I supplemented these personal stories by reading extensively on the internet--DID help sites, the Sidram Institute, the International Society for the Study of Trauma and Dissociation, medical websites, and original scientific papers. I verified and amplified what I had learned by interviewing a DID survivor “J” who is almost completely reintegrated. Long after the manuscript was in, I read two more autobiographies: A Fractured Mind (Dr. Robert B. Oxnam) and Breaking Free (Hershel Walker), and it felt like I was hearing the same tale again and again. The principles of the condition seem to be very consistent from case to case--from origins to discovery to therapeutic process, from internal metaphoric imagery to the complex  interrelationships among alters.

Part of my drive to write this story began with a popular science article I read on the new area of neuroscience research: optogenetics. In optogenetics, a light sensitive gene from an archaebacteria is introduced as a control sequence into a gene that produces neurotransmitters. Yes, the science geek in me found this fascinating: Essentially light can be used to turn on and off the flow of messages between nerve cells. I read several scientific papers on the process and on the results and interviewed my brother, a university neurobiologist, on whether Angie’s “experimental technique” was theoretically possible in the future. The answer was yes, and potentially in the not-so-distant future. Optogenetics has been called “the technique of the decade” and is now a major area of grant-funded research. Given that I wrote the story in 2009, I’ve been reminded yet again how hard it is to write near-future science without it coming true before publication.

All the other research was on the fly—location details via Google maps, forensic advice from the LA coroner’s office, and even a restroom signage consultation with a high school. Did you know that high schools in California have GIRLS’ rooms and not WOMEN’s? I didn’t. Now I do.

My review of Pretty Girl 13 will be posted on the blog sometime soon so be sure to check back or you can always subscribe to the blog for it to show up on your feed.

As promised,Liz is giving away a U.K Edition copy of her book to one lucky INTERNATIONAL winner.Please see Terms And Conditions on the widget for details.Good Luck! :)