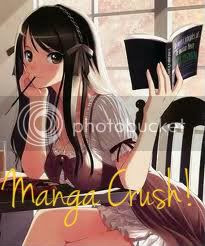 Other than being a huge fan of YA novels, I am also a fan of mangas and anime. So to express my love for mangas and anime and to connect with those who share similar feelings, I have created this meme.
Manga Crush! is a weekly meme hosted here where you rant about a manga character on whom you have recently developed a crush.Here's how the meme works:
Spread the word. Let others know about this meme and how they can participate.
You can find a list of my Manga Crush! posts at the Weekly memes at Daydreaming Bookworm page.

That's it! Hope you have fun doing this! =D